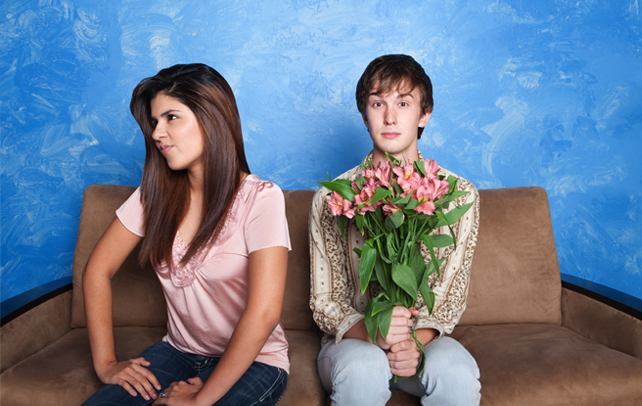 Visualise this: ‘You get into a serious conflict with your friend; you say many mean things and walk away angrily. Later, you think over it day and night and realize that it was your fault and that your friend was indeed right. You know you are sorry for what you did. What do you do now?’ It is indeed important to realise that you have done something wrong rather than just apologizing for the sake of getting along. Depending on how you frame your apology, the other person can understand the extent to which you regret what you have done. The key to a good apology is to approach others with the kind of humility that makes them feel comfortable and cared for. It has to come all the way from your heart to be genuine; pretending to be sorry doesn’t make any sense. If you ask for forgiveness as you mean it, it won’t be difficult for the person to forgive you. Also, be patient and give people some time to think about your apology and get over the incident, serenely. It is harder to ask for forgiveness than it is to forgive. You know you have done something wrong, but you don’t know how to go about asking for people’s pardon. There are various ways of approaching people for this purpose. Read further to have a look at the various ways in which you can beg for clemency from people.

Talk To Them
People mess things up quite often. It is normal to make mistakes but to realize that you have committed one is very essential. Once you have had a problem, take some time for yourself and think about it. Consider the part where you went wrong and, without justifying your actions, forgive yourself. The next step is to talk to the person concerned and clear the misunderstanding by talking about it openly; make sure you don’t leave any gap for further misinterpretations.

Initiate The Talk
Even if the other person does not intend to talk to you after your conflict, it is your responsibility to initiate the talk. Convince the other person to talk it out and resolve the relations that might have been soured due to your intentional or unintentional mistake.

Write An Apology
If you feel really terrible about what happened or cannot reach the person physically, for any reason, then write to them. Often when people are badly hurt, they stop responding to our desperate attempts of reaching out to them. At such times, you must understand their state of mind and stop assailing them with infinite calls. Reach out to them with letters and/or emails. Apologise genuinely; writing to set things right is often a fruitful idea.

Be Completely Honest
Always be honest with your thoughts. Be open to express yourself in front of the other person so that they know exactly how bad you feel and how much their forgiveness means to you. If at all they end up saying a few harsh words, be patient. Say your bit and leave before the scene gets ugly again.

Take Responsibilities
Imagine, you happened to spill ink on your sister’s important assignment. In such a case, you become clueless as to what to do. If you too encounter similar instances, it is always best to inform the related person about the incident. Listen patiently to everything that the person has to say and take responsibility for the action. You may have spilled the ink accidentally but that doesn’t undo the damage; you must help finish the assignment. Regretting your mistake and taking responsibility for setting things straight, makes you a better person.

A Humble Approach
Nobody is perfect and mistakes happen all the time. But, it is necessary that you are ready to resolve things at the earliest. If you are engaged in a conflict, you actually need to settle down and think with a clear mind. While you approach the other person, make sure that you are humble and don’t make it sound as though you are blaming the other person. Even giving an impression that you are in fact being a bigger person doesn’t help; remember, it was you who erred.

Accept Consequences
Your sudden raise of voice or temperament might have hurt the other person badly. So, take responsibility of the act and face the consequences. If the person is very fond of something, make them happy by getting them that particular something; it will make them feel better.

Emotional Healing
Tell them that you understand how much they might have been in pain because of your bad behavior. This helps them feel better emotionally and hence, makes it easier for them to forgive you. State your mistake clearly and assure them that you won’t repeat it.

Don’t Spread Rumors
If everything that you have done so far doesn’t help in mending bridges then accept your fate and move on. Do not start acting badly and refrain from exaggerating the entire incident to others. Keep it to yourselves. By acting all mature about the incident, you actually improve your chances of resolving the issue at a later point in time. It is important to give each other ample time, space and respect.

Henry Ward once said that, “I can forgive, but I cannot forget, is only another way of saying, I will not forgive. Forgiveness ought to be like a cancelled note—torn in two, and burned up, so that it never can be shown against one”. The efforts that you take in asking for forgiveness maybe hard, but they do make you a bigger, more mature person. More than that, such efforts give you a peace of mind that anger and guilt usually steal from you. Just make sure that you don’t turn into a door-mat in your efforts. Asking for forgiveness for a wrong deed is good but that doesn’t mean that you can be taken for granted and exploited by people. Put in your best efforts at being forgiven but if it doesn’t work then don’t be disheartened — just move on.