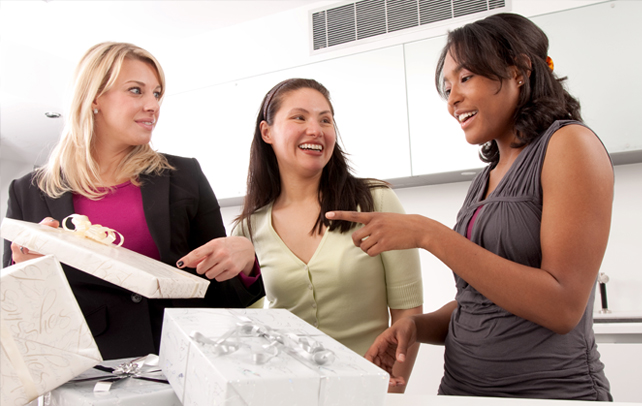 A tradition which originated in the 1890s, the bridal shower is a common custom in the West. It is a small celebration with closest friends and family and is held around a month or two prior to the wedding. It a very special and intimate time the bride and groom spend with the closest people in their lives. Be it because of recalling funny incidents or getting advice and support from friends and relatives, the bridal shower is truly a memorable part of the entire wedding process. The bridal shower is mainly hosted by the maid of honor and the bridesmaids. And this tradition provides a smooth transition for the bride from her unmarried life to her new life as a wife and a homemaker. Like every other important event or tradition, the bridal shower too has a number of etiquette which should be kept in mind. There are no hardcore rules and regulations, but some pointers around which this important tradition should be based are discussed below.

Etiquettes For A Bridal Shower

Who Should Host
According to the older traditions, close family of the bride like the mother and the sisters are not allowed to host the shower as it seems like a way of receiving gifts. So, generally the bridal shower is hosted by the maid of honor and the other bridesmaids. However, if the bride doesn’t really have any bridesmaids to hold the shower for her then her family can step in for organizing and making this day eventful for her.

When It Should Be Held
The bridal shower should be held at least a month or two before the wedding. Having it too close to the wedding might be a bit troublesome in terms of the planning. Not to mention the travel arrangements that the invitees would have to make in order to be able to attend both the functions. It is a get-together of close friends and family and it would be highly appreciated that it be planned in such a way that it isn’t inconvenient for anyone. Nowadays, of course, to save precious travel time, these showers are held right before the wedding so that separate arrangements are not required for them.

Who To Invite
Firstly, the mothers of both the bride and groom should be invited. The sisters of the bride and groom are also important. Other close friends and family of the bride make it to the guest list. However, in today’s time, the concept of the bridal shower has modernized and men can be invited too. And if that is the case, then the groom, brothers and couples have to be called; this might double the guest list. It all eventually depends on the hostess and her budget and the bride should take this into consideration too.

Who Should Pay
The bridal shower is organized by the people who love you but mainly the maid of honor takes the lead. The maid of honor can go about financing the whole shower but it only makes sense for all those who are jointly organizing it, to contribute equally.

What To Gift
A bridal shower is all about showering blessing and gifts. The most elegant choice is being open to any kind of gift the guests bring along and not mentioning anything about the gifts on the invitation cards. However, another option is for the bride to register herself with bridal shower registry and this should be mentioned in the invites. Also, if some of the guests are not able to attend the bridal shower, sending a gift across is a good gesture which will surely be appreciated.

How To Decorate
The maid of honor and the hosts should take care of the decorations, keeping the bride’s interests in mind. The bride-to-be should be asked what colors she would like to follow and whether she wants a particular theme. Romance is the basis for all showers so this feeling should be captured in the decors. The main parts of the décor would be deciding on the table linen, centre pieces, the cutlery and all finer details like the gifts you have to give away to the guests.

Saying Thank You
Any bridal shower cannot be considered even a remote success if it doesn’t involve a multitude of fun loving and well-meaning people. And if the guests turn up gifts for the bride, the occasion becomes all the more memorable. Hence, a thank you note is a must for each person who attended the shower. When addressing people who brought along gifts to the shower, the thank you note must be customized to say a bit about how the bride appreciated the merchandise. The bride should send thank you notes, within a week after the shower, expressing her gratitude and appreciation.

Hope these basic etiquette of organizing a bridal shower help you organize one well enough. The hostess should keep the bride’s considerations in mind and the bride should express her gratitude and treat this age-old tradition appropriately.