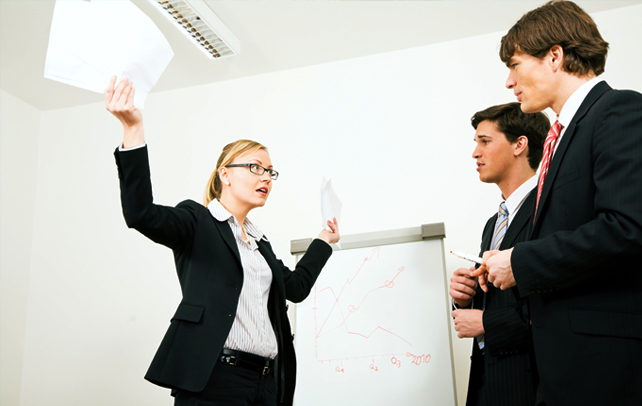 Criticisms are a part of life; in fact, they have been a part of your life since the time you were a toddler and your mother told you what to do and what not to do. Having assimilated most of her instructions without much revolt then, you moved on to your teenage years where you were bogged with criticisms, positive or negative. The docile instructions seem to have taken the form of hostile criticisms. While most do tend to grow out of that particular phase and become more grounded later on, it is also a fact that criticisms are not digested with much enthusiasm even then. It is probably because you see them as an attack on your individuality. Often, critics become your hated enemies and you see nothing beyond your smarting pride. What you tend to forget is that criticisms make a person what he is. Any stand out performer in a given field is that individual who has handled criticisms in the best possible manner and assimilated their teachings.

How To Handle Criticism
Admittedly, handling criticisms is, more often than not, not everyone’s forte. So how exactly do you go about in your attempt to master the technique of handling them?

Nobody Is Perfect, And You Are Not ‘Nobody’
At the outset, what you need to keep in mind is that no man or woman is born perfect. If they appear perfect in all sense, there surely must be a tale of hardship behind that perfection. Yes, everybody makes mistakes. You can say without any hesitation that a person who has never made any mistakes in life does not exist. If at all such a person does exist, you should be feeling sorry for them because they have never grown in their life. If failures are the stepping-stones to success, then criticisms are the pedestals to growth. Therefore, accept your mistakes. You are bound to invite criticisms even for a near perfect work. So accept that fact that you will have your fair share of criticisms.

Criticisms Are Our Textbooks And Critics Are Our Teachers
The best teachers you will have over the course of your life are not the people who will sing your praises but those who find faults even with that work which you seem to have done with perfection. Criticisms will always be doled out in generous amounts. Your task would be to separate the chaff from the husk. This implies that you need to separate the constructive criticism from the not- so-constructive ones. Acknowledging that you are not perfect but are surely on the right path would serve you well when looking into criticisms.

Criticisms As A Guide To Knowing Yourself
A coach comes along and sees a talented ward who needs a correction of some of his basics. He does so and in some years that ward goes on to become a world-beater. In all probability, you must have heard at least one story along these lines. There are plenty of them. What if the ward chose to ignore the coach (well, hypothetically)? Would he have gone on to become a top performer in his field? Criticisms helps you become aware of your strengths and weaknesses, and thereby yourself. Therefore, pay them the heed that they deserve.

Don’t Just Hear—Listen
It is easy to delude yourself in to thinking that you take heed of criticisms by developing a habit of hearing out your critics but never listening to them. Irritating as they may sound to you, it would only do you good if you took some effort and listen carefully to what they have to say about you. It would only take so much time as hearing, but with a bit more effort, you could be on the way to change yourself.

Judge Your Responses
Anyone can hand out criticisms and it can pertain to any matter. What is in your power is how you respond to them. You can lose your head and help none or you can consider what is to be considered and leave aside what needs to be left aside. Your response should be based on the gravity of the criticism. Accept criticism graciously but act only with prudence. There will be some that need immediate attention, some which can be afforded some time and a few which might not need your attention at all. In each case, act according to the demands and nature of the criticisms.

Consult with Others
Even when it is said that critics should be considered as teachers, it should also be kept in mind that they are not always right. Chances are, there will be people around you who understand you and the situation you are in better than most others. Among them, there must be a few who can assess you dispassionately. At times, when you cannot make head or tail of a criticism and find it eating in to you, these people could act as good consultants. They could provide insights, which could help you.

Invite Criticisms
Odd, but it is easily the best way to handle criticism. Make yourself open to criticism to the point that people can come up to you and point out your shortcomings. This helps you grow immensely and quickly as you might become aware of your shortcomings much sooner than you would otherwise have.

Finally, Be Yourself And Follow Your Convictions
It would not be too far off the mark to say that convictions can make or break you as a person according to how you react to them. Convictions admittedly keep changing and it is probable that criticisms and development play a large part in this change. However, how would it look like if criticisms leave you without any convictions? Such a scenario happens only in extreme cases or over a period of time. Therefore, criticisms are best taken with a pinch of caution. If you had already decided on doing something, it is better to go ahead and do it. Failures are even better teachers than criticisms and leave you with enough experience to be your own critic.

Like it or not, criticisms are a part and parcel of your life and are guides par excellence; only you should chart out your own paths following their directions.