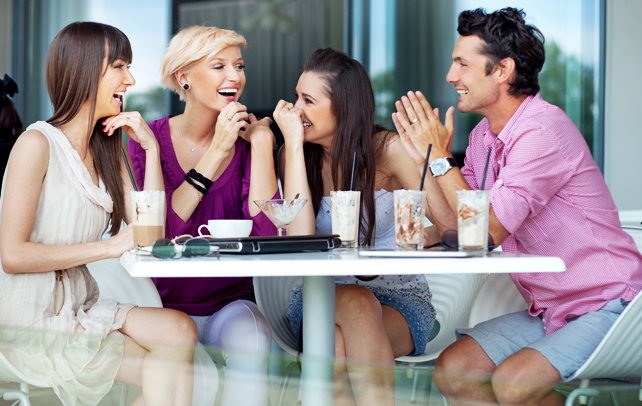 With so many interesting people around, don’t you wish you could just talk to all of them and find ways to break the ice? Starting a conversation comes easily to some while it can be a daunting and overwhelming task for many. There are many who can kickoff conversations effortlessly and can be so great at making friends, and people who can do so are the ones who have a large social network—and not only on ‘Facebook’ or ‘MySpace’ but in real life! Often your shyness or fear of saying something silly can hold you back from expressing yourself well. However, remember, talking to people is the only way to figure out and overcome your apprehensions. Not everyone is a born conversationalist, so practicing can really help you open up to different situations and different people. So go ahead, imply some good conversation starter tips, and back yourself with successful conversations to help boost your self-confidence.

How To Start A Conversation
Get The Right Attitude
Cultivating the right and positive attitude towards everyone around is extremely important. You should really let go of the self-consciousness and roll up some confidence up your sleeve. If you don’t believe in yourself, then how should you expect the person you are trying to talk to respond coherently? Having the right body language, which is simple yet inviting, can do wonders. A confident posture and an inviting smile can give the impression that you are a warm and friendly person. Therefore, march up to the person without any preconceived notions or judgmental values and greet him or her with a ‘hello’.

Seem Interested And Curious
It’s understood that you wouldn’t like it if someone you are talking to is busy stealing away looks from you, glancing around here and there and for worst cases checking the time on the watch! That is how important it is to seem genuinely interested when someone is trying to talk to you. Pay attention to the person and the environment you are in. You can pick up some hints with your close observations of how to start a conversation. Probably a compliment or two on the person’s stilettos, a question on the new app on the iPhone 4 someone has been digging into, or expressing distress on the train timings can help figure out common ties and its always a good way of starting a conversation. You could easily be astounded as to where such misplaced discussions could take you.

Always End Open Ended
An open-ended question could keep a conversation rolling. A ‘yes’ or ‘no’ answer just kills the moment, and you will start wondering why you even bothered to speak. Don’t put yourself in such a position and instead figure out ways to ask more intuitive questions. For instance asking “how is the weather in Australia?” would progress the conversation further giving details on the temperatures, rains or snows Australia is facing, rather than asking “is it cold in Australia?” which could possibly result in a blunt yes or no! Open-ended questions demand a more descriptive explanation and also show more concern than simple closed questions. And that is exactly what good conversations are about, some healthy discussions.

It’s A Two Way Street
Conversation is between two people. You can’t be possibly be doing all the talking yourself while the other person turns a deaf ear to your blabbering. But again a good conversationalist can even make a dumb person talk. Therefore, paying attention to what the person is saying.  Also, rewording the answers to a new question gives the impression that you are listening and are interested. It gives a chance to dig deeper into the topic. However, make sure you don’t throw one question after another, but instead inhibit a healthy discussion with exchange of ideas and viewpoints. If the other person wants to talk and has an idea to express, give them the liberty to interrupt you. After all conversation is a two way street.

Speak Clearly, Fluently And Loudly
It’s not enough to have the right attitude and know what to speak of as it’s not going to make much difference if you go unheard of. Creating the right first impression when startthe conversation is vital, and it is certainly going to be hindered when you ask the person to repeat what he/she just said. So it’s very important to speak fluently and not stutter and stumble over your own words. Nervousness and shyness can make you speak fast, so that you get over with the initial talking but try modulating your speed and modulate your tone accordingly by putting in a conscious effort.

Some Good Conversation Starters
Some safe conversation starters, which don’t usually go wrong, would be discussing the weather or current affairs that made the headlines in today’s newspaper. That means keep yourself updated of the happenings! Also who doesn’t watch movies and listen to some kind of music. So if not able to invent as good way of striking conversation and are not sure of what to talk about, there is no harm in dodging the tried and tested starters, and a decent conversation might just follow.

Opening a conversation is not that difficult a task. Weaving a relationship with the person by giving your hundred percent by observing, listening and responding is what you need to do. Yes, it’s easier said than done but a genuine effort, a smile across the face and practice with being around people is what you will have to throw yourself into conversing and you are sure to be holding the ‘gift for gab’ yourself soon.