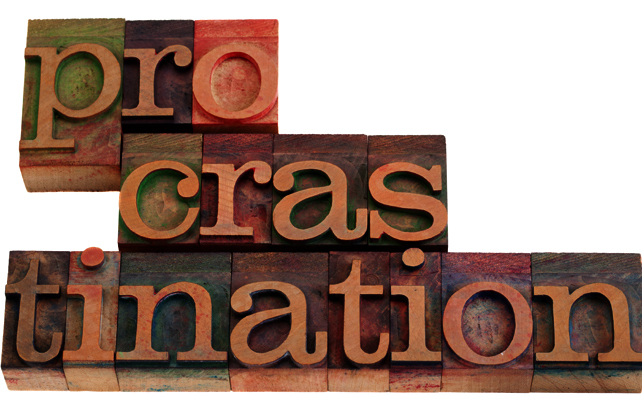 Procrastination may not be a disease, but it certainly is a deep-rooted human nature, which remains unnoticed and unrealized to most of us. It may not be fatal but is catastrophic to one’s development. It is a bizarre attitude that leads nowhere. Some people are so much smitten by their longing for perfection that they spend the entire life waiting for the perfect moment to arrive. This unfortunately never comes. They seek the utopia, which doesn’t exist. Again, a few people cringe even at the whiff of a failure. The fear of failure lulls them to such a void that they hardly ever come out of it. Instead of overcoming their fear, they flee to the refuge of procrastination recurrently and incurably. It is for our own sake that we overcome such fears and attitudes. Procrastinations will not help you overcome the problems, which you must confront to get rid of as early as possible. Sometimes it might cause delay but that will certainly make matters worse for you. There are moments when life presents opportunities, which must be seized. Procrastination will let those opportunities slip out of our hand, which might not present themselves again. So act now!

How To Stop Procrastinating
Realize That You Are Procrastinating
“Every true, eternal problem is an equally true, eternal fault; every answer an atonement, every realization an improvement” – Otto Weininger. Realization that you are procrastinating is the very first step towards overcoming it. Recognize avoidance symptoms such as lying idly and daydreaming, internet surfing, loitering around aimlessly and get rid of them as early as possible.

Discipline Yourself
Procrastination is more of a psychological issue rather than a physical one. Try not to falter during the process of accomplishment of a work. Act according to a routine and stick to it without failure. Prioritize you works and do what must be done at specific moments. As in “Great Debaters”, perhaps one of the greatest movies in the last century, James Farmer, one of the characters in the movie told his son James Farmer jr. that he must do what he has to do in order to do what he wants to do.

Set Rigid Deadlines For Yourself
Once you set a deadline for yourself, don’t fall short. Even if the deadline is self-proposed and will hardly beget any punishment or rebuke from others. Let no thought occupy your mind until and unless you complete your assignment as per the deadline. Don’t mold the deadlines on your wills or whims.

How To Stop Procrastinating
Fetch Someone To Supervise
Procrastination is a sort of behavioral problem, which often is very tough to break if one holds absolute freedom and unaccountability. Compile a “to-do list” and share it with someone and yourself accountable to that person. Get someone to supervise your progress and evaluate if you are meeting your deadlines or not. Give the person the liberty to criticize or even punish you if he or she is younger than you are. Fear or shame of being criticized or punished will compel you to meet your deadlines. As they say, arise awake and stop not till the goal is reached.

Get Rid Of  The Distractions
Some people like to take a break from their work and prefer listening to music or watching television or sports. For those who are constant procrastinators, this is certainly not permissible. There is a great likelihood that if something interesting appears on the screen and if you are a procrastinator, you will put your works aside and will yield your impulses.You must concentrate on one work at a time and must run on schedules. Do not let your mind astray. If there are factors that might attract your attention and distract your concentration, get rid of them in advance. Don’t let them appear and reappear while you are working and distract you.

Split Complicated Tasks Into Fragments
Fragmentize your works. Don’t take too much burden at a time. If you split a larger task into smaller fragments, take one at time. That will take much less effort. And if a work doesn’t appear to be cumbersome and mammoth, it will hardly entice you to procrastinate.

Censure Yourself
Be critical to yourself. Talk to yourself when alone. If you fall short of your deadline and still are procrastinating your assignments, repeatedly criticize yourself. Take vows not to do the same again. You don’t have to chastise yourself for lagging behind the deadlines or failing to overcome your procrastinating habits right away. Consider it as a process and not implementation.

Reward Yourself
Reward yourself on your accomplishment. A reward must not only come at the accomplishments of the entire project or assignment you have undertaken. Rewardyourself even at the completion of smaller fragments, which you have already divided into your work.

These techniques, however simple they may appear, are effective. Remember tomorrow never comes and today is the tomorrow we dreamt of yesterday. Time is fleeting. Don’t put the matters in the garbs of an unseen, unknown tomorrow. Take the first step and commence a journey to overcome such a moral drawback. Work is pray. There is nothing you can’t get, you can’t be. All you need is a positive attitude and diligence. Do what must be done. Cede to the need of the hour and tomorrow will take care of itself. Whatever is supposed to be done at this moment must not be procrastinated and left for tomorrow. So wake up and get started now.