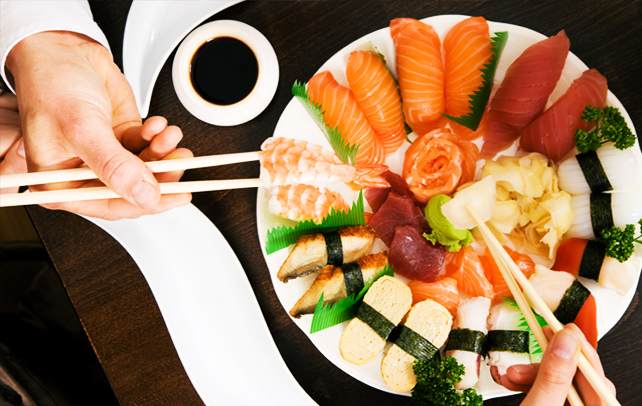 Japanese dining is all about aesthetics, atmosphere and the texture of food. But more important than any of these, the etiquette of eating is supremely important for the very uniquely-cultured Japanese. Like the various other delicacies of Japanese cuisine, there is a well-defined etiquette for eating sushi too. The etiquette of eating sushi is something that even non-Japanese, sushi-loving people, will be curious about. This is because, while eating sushi, many are not aware of the basics of eating it or the essentiality of following such etiquette. The fact that these etiquettes led to the origin of various sub-cultures, mostly outside Japan, also makes them special. Also, keep in mind that while eating certain variations of sushi is very easy, eating others can be daunting especially if a person is untrained in using chopsticks. There are certain taboos while eating sushi, such as peeling off the sushi bane from the rice to dip it in soy sauce; it is regarded impolite. It is seen as an absolute contradiction of the chef’s job and the great effort he put in making sushi a visual and culinary delight. However, do not get intimidated by all these rules. What is more important in eating sushi is to appreciate and try to preserve the beauty of this scrumptious delight while eating it.

What Is Sushi?
Sushi is a fast food in Japan. It can be served as a finger food to be eaten with hands or it can also be served with chopsticks and/or other elaborate utensils. This famous Japanese delight is made of almost-raw fish and is considered the flagship food of Japanese cuisine worldwide.

Sushi is a traditional food and it is only natural that you eat it in proper traditional ways. The failure to do so might upset or humiliate the chefs. Irrespective of whether you are a first time sushi-eater or a culinary enthusiast, keeping track of all the etiquettes and rules is not always easy. With the ever-evolving food etiquette around the world, even the sushi etiquette has changed from what it used to be. You might find it hard to keep track of these rules all the time but as long as you admire this dish wholeheartedly, nothing can bar you from enjoying it to the core. So, take it easy and go digging into that lip-smacking plate of sushi you’ve been drooling for.